The Back Door is a teleportation mechanism, invented by Jenkins, which is located in the Annex. A mini version was created with a limited charge for The Librarians to escape The Bermuda Triangle, however instead they were used by The Librarians to get people off a crashing plane. Flynn went through The Bermuda Triangle alone and escaped by other means.

It can be used to transport from the Annex to anywhere there is a door for it to attach to, including interdimensional places such as the Library or the Labyrinth.

Back Door Globe next to the Spinning Wheel of Clotho 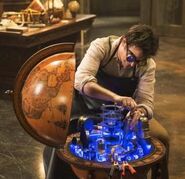 Back door to Paris

Back Door in storage containers

Skateboarding through the Back Door

Back Door in porta potty

Back Door in a field

Back Door to Mayfield high

Back Door in train tunnel

Back Door in Airplane

Back door to Mount Rushmore

Back Door in the Jones' Shed

Back Door in New Weedon House