The Annex
The Libris Fabula is a magical story book.[1]

When read aloud to an audience, it can be used to:

Alter Reality: Things written in the Libris Fabula will become real. Restrictions, if any, are unknown. The book could certainly "countermand" its own earlier transformations;

Sap Lifeforce: The Libris Fabula will slowly drain the life and youth of the listener, and transfer those qualities to the reader;

Open Portals: If used in conjunction with the Back Door, the Libris Fabula will be able to open portals to almost anywhere, including the unbound Library (see Anchor Chain) or the Loom of Fate.[2] It is unknown whether this ability would work with other portal sources.

The Libris Fabula will turn nearby people into fairy tale characters over time. The changes include a shift in appearance and clothing, as well as the behaviour of both of the person affected and those around them.

In "And the Fables of Doom", each one of The Librarians was turned into a fairy tale archetype:

The Libris Fabula opening a portal to the Library.

The Libris Fabula opening the portal to the Library.

Library display card for the artefact- made by user magicexpert28 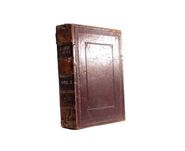