The Adventures of the Librarian: Quest for the Spear

For the film, see The Librarian: Quest for the Spear. 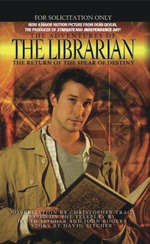 Hidden beneath the monolithic Metropolitan Public Library is a repository for mankind's greatest secrets. From the Golden Fleece to Pandora's Box, every enigma and artifact from every known and unknown civilization is protected from the forces of evil who, if given the chance, would use the priceless treasures for their nefarious plans. Only one man can keep them safe: Flynn Carson -- the man known as the Librarian.[1]